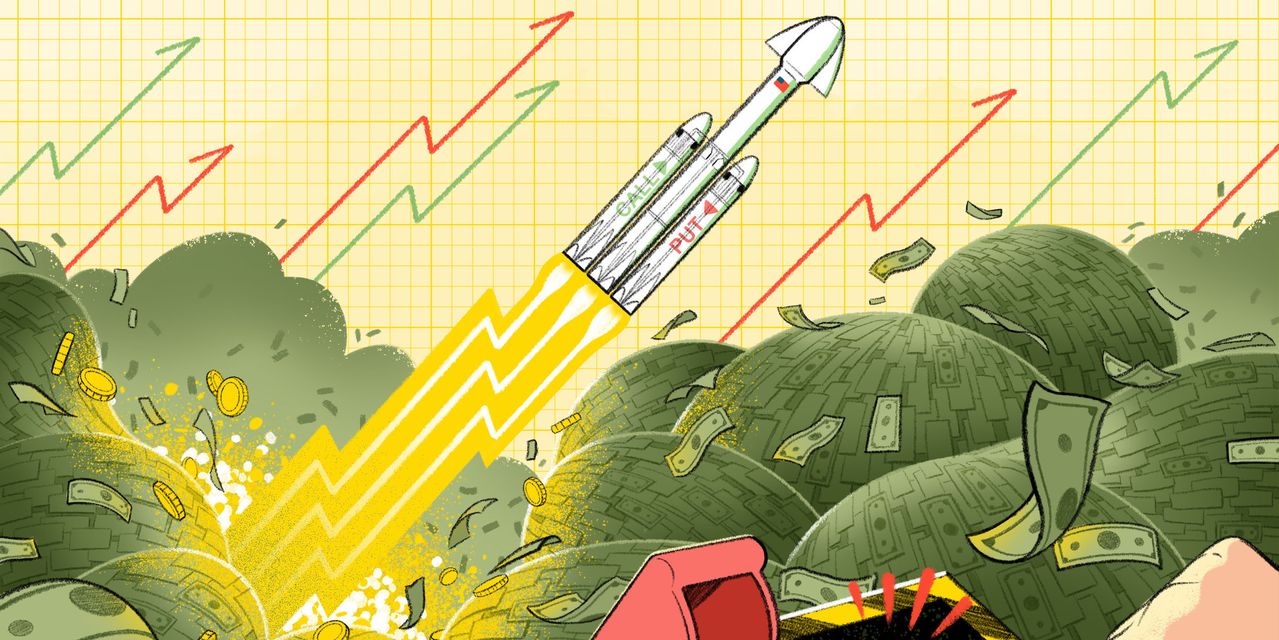 
Apple have become even hotter as stock option speculators sweep back into the market. Many are retail investors holding their positions for less than a day. This new day-trading frenzy in options is helping lift individual stocks and bolstering the revenue of online brokers like

Earlier this month, total equity options volume reached 56.5 million contracts—the second-highest total ever, behind the 59.2 million contracts traded on Jan. 27 at the height of the meme-stock craze involving

Retail traders tend to prefer lower-priced options. That is apparent in a preference for cheaper—and more speculative—options with short maturities. About 40% of options trading volume on individual stocks is in contracts expiring within a week and 54% within two weeks, according to the Susquehanna Financial Group. In stocks like Tesla (TSLA) and Apple (AAPL), as much as 65% of trading volume is in options expiring within a week.

“Options have become more important in the mix of retail trading than ever before,” says Richard Repetto, an equity analyst at Piper Sandler.

Given its recent volatility and prominence, Tesla has been a favorite of options investors. One sign of the heavy day trading in Tesla options is that high volume in the company’s call options generally translates into little change in open interest, or the number of outstanding contracts.

Day trading in options on volatile stocks can be enticing, but those options are pricey. And the value of short-dated options in particular can erode very quickly, absent a significant move in the stock.

It can also be tough for day traders to capture big moves in individual stocks—and the overall market—during the trading session.

Big changes in many stocks often happen on the opening trade, as investors incorporate news occurring since the prior session, such as earnings reports. Tesla was recently up 45% year to date, and 42 percentage points of that cumulative move came overnight against three points during the day, Susquehanna data show.

Historically, nearly all of the net change in the

Note: Call volume for the 20 trading days through Nov. 15

Options trading has an impact on the overall market, but in ways that may be more psychological and nuanced.

“People used to be more afraid of a stock crashing, not doubling.”

“The actual option volume on a daily basis and how much that impacts the stock—I think that is potentially overstated,” says Chris Murphy, co-head of derivative strategy at Susquehanna. “The flip side is there is a psychological and signaling effect that may be understated. When call option volume surges and gets talked about on CNBC and in articles in Barron’s and The Wall Street Journal, and starts trending on Twitter, if you’re a momentum-based trader, whether you’re institutional, retail, or quantitative, you’re going to look at it, and you’re more likely to buy the stock.”

The big moves in stocks like GameStop, Tesla, and recently


Avis Budget Group (CAR) are resulting in options pricing that is different than in the past. So-called out-of-the-money calls on some individual stocks, which require a big move for an option payoff if held to expiration, are pricier than out-of-the-money puts, a reverse of the historical pattern. One example:

“People used to be more afraid of a stock crashing, not doubling, but we’ve seen more stocks double or triple than get cut in half, and that has shifted the way options are priced,” says Henry Schwartz, senior director, head of product intelligence at

Oppenheimer chief options strategist Michael Schwartz, now 79, has been in the business for 56 years—since before there were listed options.

“Options are a tool to reduce risk, not increase it, but that’s not what’s happening,” he says.