This week, Samsung LSI announced a new camera sensor that seemingly is pushing the limits of resolution within a mobile phone. The new S5KHP1, or simply HP1 sensor, pushes the resolution above 200 megapixels, almost doubling that of what’s currently being deployed in contemporary hardware in today’s phones.

We’ve been familiar with Samsung’s 108MP sensors for a while now as they’ve seen adoption for over two years both in Samsung Mobile phones as well as in Xiaomi devices, although in slightly different sensor configurations. The most familiar implementation is likely the HM1 and HM3 modules in the S20 Ultra and S21 Ultra series, which implement the “Nonapixel” 9:1 pixel binning technique to aggregate 9 pixels into 1 for regular 12MP captures in most scenarios.

One problem with the 9:1 scheme was that you’re effectively having to magnify 3x in relation between the two resolution modes, and for devices such as the S21 Ultra, this was mostly a redundant mode of functioning as the phone had a dedicated 3x telephoto module to achieve a similar pixel spatial resolution, at a larger pixel size.

8K video recording was a use-case for when the native 108MP resolution made sense, however even here the problem is that the native resolution is far above the required 33MP for 8K video, meaning the phone had to suffer a very large field of view crop as it didn’t support resolution super sampling down from 108MP to 33MP.

The new HP1 sensor now has two binning modes: 4:1 and 16:1. The 4:1 mode effectively turns the 201MP native resolution to 50MP captures, and when cropping into a 12.5MP view frame, would result in a 2x magnification which would be more in line with what we’re used to in Quad-Bayer sensors. In fact, the results here would be pretty much in line with Quad-Bayer sensors as the native colour filter of the HP1 is still only 12.5MP, meaning a single R/G/B filter site covers 16 native pixels.

A 4:1 / 2×2 binning mode is more useful, as generally the quality here is still excellent and allows mobile vendors to support high-quality 2x magnification capture modes without the need of an extra camera module, it’s something that’s being used by a lot of devices, but had been missing from Samsung’s own 108MP 3×3 binning sensors because of the structure compromise. Samsung LSI here even states that the HP1 would be able to achieve 8K video recording with much less of a field of view loss due to the lesser cropping requirements.

This leads us to the actual native resolution of the sensor, the 201MP mode; here, native pixel pitch of the sensor is only 0.64µm, which is minuscule and the smallest we’ve seen in the industry. What’s also quite odd here, is that the colour resolution is spatially 4x lower due to the 2.56µm sized colour filter, so the demosaicing algorithm has to do more work than the usual Quad-Bayer or Nonapixel implementations we’ve seen to date. 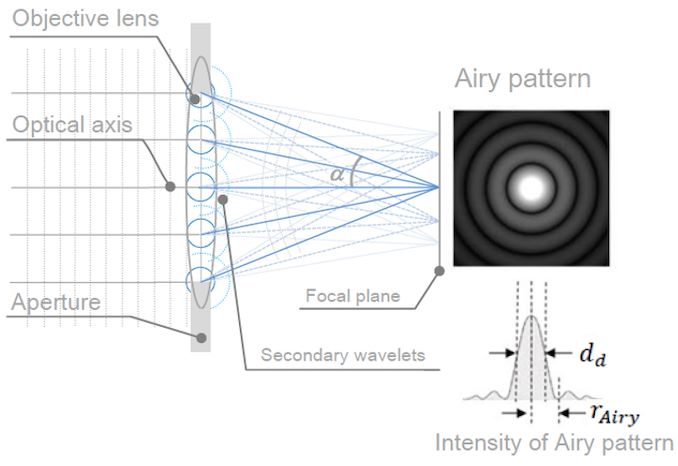 At such small pixel pitches, we’re running into different problems, and that is the diffraction limit. Usually, such large sensors are employed as the “wide” angle module so they typically have apertures between f/1.6 and f/1.9 – the HP1 is a 1/1.22” optical format sensor that’s 19% larger than the HM3 in the S21 Ultra, so maybe a f/1.9 aperture is more realistic. The maximum intensity centre diameter of the airy disk at f/1.9 would be 1.15µm, and generally we tend to say that the diffraction limit where spatial resolution gets noticeably degraded is at twice the size of that – around 2.3µm, that’s well beyond the 0.64µm pixel size of the sensor.

The 200MP mode might have some slight benefits and be able to resolve things better than 50MP, however I very much doubt we’ll see much advantages over current 108MP sensors. In that sense, it appears to me to be a pretty pointless mode. 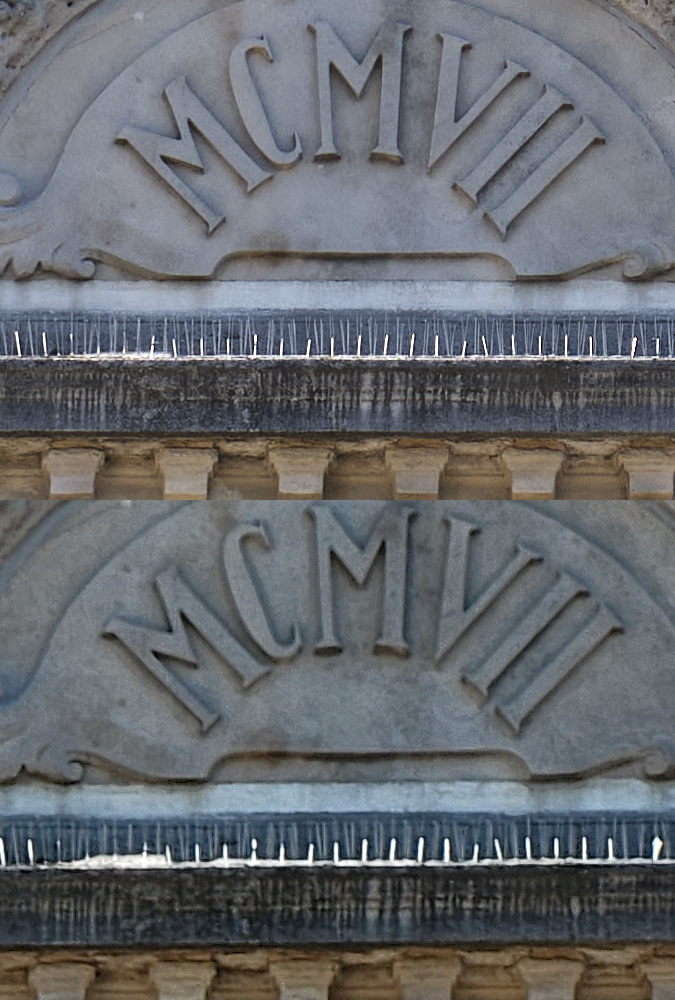 That being said, we do actually see camera implementations in the market that are far above the diffraction limit in terms of their sensor pixel size and optics. For example, above I took out two 1:1-pixel crops – one from an actual camera and lens, and one from the Galaxy S21 Ultra’s periscope module. In theory, we should be seeing somewhat similar resolution, glass optics quality aside, however it’s evident that the S21U is showcasing a far lower actual spatial resolution. One big reason here is again the diffraction limit, where the S21U’s periscope at 1.22µm pixels and f/4.9 aperture has an airy disk of 5.9µm, or 4.82x the size of the pixel, meaning that physically the incoming light cannot be resolved more than at a quarter the resolution of the actual sensor.

To be able for the HP1 sensor to take advantage of its 200MP mode, it would need to have a very large aperture optics to avoid diffraction, a very high-quality glass to actually even resolve the details, and to not be in very demanding high dynamic range scenarios, due to the extremely low full well capacity of the small pixels.

The one thing the sensor would lack in terms of more modern features is full-sensor dual pixel autofocus, with Samsung noting it instead uses “Double Super PD”, with double the dedicated PD sites as the existing Super PD implementations such as on the HM3.

Overall, the HP1 seems interesting, however I can’t shake it off that the 200MP mode of the sensor will have very little practical benefits. In theory, a device would be able to cover the magnification range from 1x to ~5x with quite reasonable quality and maybe avoid having a dedicated mode in that focal length, however we’ll have to see how vendors design their camera systems around the sensor. The new 2×2 binning mode however is welcome, simply due to the fact that it’s a lot more versatile than the 3×3 mode in current 108MP sensors, and should allow real world large benefits to the camera experience, even if the native 200MP mode doesn’t pan out as advertised.